Home to the world-famous Guinness Brewery, the city of Dublin knows a thing or two about pubs. You won’t be able to wander down one of the main streets without stumbling upon a traditional Irish drinking den or a more modern evolution.

This is perfect news for students! Take a night off from the bars and clubs and grab a bunch of your friends to head out on a Dublin pub crawl across the Irish capital. Here are the top picks of pubs you should stop at for a beer or two along the way. With the honorary title of Ireland’s oldest pub (it’s been around since the late 12th century), the Brazen Head is well worth a visit. Inside it’s the epitome of a traditional pub, with exposed brick walls lined with plenty of vintage wartime ads and medieval-inspired scripts, as well as lots of wooden benches for big groups, making it a homey spot for a pint with all your friends.

If you time it right, the pub also has a reputation for showcasing live Irish music on most nights, from local bands and some more well-known talents. Sit back and enjoy a classic Irish night in seats once frequented by famous literary names, including James Joyce, Jonathan Swift and Brendan Behan.

The pub is just around the corner from Christ Church Cathedral and Dublin Castle, with a view onto the River Liffey, so the terrace garden is the perfect spot during the summer months. If you get a bit peckish, their fish and chips goes a treat with a beer. 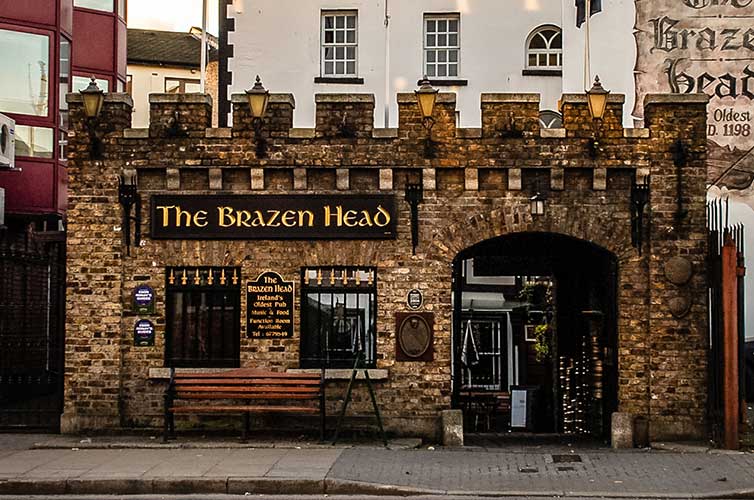 Dublin’s original gastro-pub, Davy Byrnes, is a good place to start off your night of pub-hopping. It’s less than five minutes from Trinity College (on Duke Street), which is very convenient when you’re in need of a break from studying.

The interiors are really impressive, making this pub far from average – with a glass-domed ceiling, polished surfaces and maritime features, the pub is worth a visit even just for its artsy, majestic design.

Throughout the day they serve up some of the best seafood in the whole of Dublin, but if it’s beer you’re looking for, they’ve got you covered there too with plenty of beers on tap and craft bottled beers.

What’s more, you know a place is going to be good if Ireland’s most successful novelist, James Joyce, referenced it in his epic novel Ulysses. Another pub that wins points for its decor, Toners is a rite of passage for any student in Dublin. Filled with glass cabinets of trinkets and curios, and decked out with flagstone floors and gilded mirrors, the pub ups the ante by blending traditional with modern, welcoming a younger crowd alongside the locals so you and your friends won’t feel out of place.

Toners became one of Dublin’s trendiest pubs when the Yard played host to Mumford & Sons back in 2012, and although the band may not be stopping by again any time soon, the outdoor beer garden is just the place to chill after a long day of studying.

It’s only fifteen minutes from Trinity College, by St Stephen’s Green and the National Archaeology Museum of Ireland, on Baggot Street. Take a seat where the king of Dracula Bram Stoker and legendary poet and playwright WB Yeats once sat, and soak up the sun.

Like many of the others that made this list, The Palace Bar is one of Dublin’s oldest pubs, with a literary reputation too, and is still decked out with Victorian influences. There’s always a lively vibe whatever day of the week. You can make the most of the sporting seasons here too – The Palace Bar airs big matches, from football and rugby to horse racing and hurling.

You won’t have any excuse for not visiting either – it’s right in the heart of the city on Fleet Street and just one minute’s walk from Trinity College, so you can guarantee a younger crowd (you might see some of your lecturers too!). If you’re bored of beer or want something a bit different, make sure you try The Palace Bar’s own whiskeys.

This pub-cum-bar has a modern edge with its graffitied walls, old leather couches and all-round cosy vibe, making it a haven for students. There are a couple of nods to traditional Irish culture too, so you can get into the spirit of the country, with good company and a beer in hand.

Enjoy all three floors and choose whichever best suits your mood – there’s jazz in the basement, a piano bar, and a mezzanine area. Situated on Westmoreland Street, right by The Palace Bar and Trinity College, Cassidy’s is an ideal stopping point on any pub crawl. In their own words, The Cobblestone is ‘a drinking pub with a music problem’, which beautifully fits the spec of the kind of place you want on a Dublin pub crawl with your friends. You’ll have to cross over the River Liffey to get onto the north side for King Street North, but it’s not too far from The Brazen Head to give you a little fresh air between pubs.

The pub has a stellar line-up of gigs throughout the week, with all kinds of music acts taking to the stage, from soul and country to classical instrumental orchestras. The Cobblestone is a great way to wind down the night and experience a different side to the city. Have we missed off any of your favourite pubs? Let us know where your ultimate Dublin pub crawl would take you.

The Student Housing Company offers stylish and comfortable private student accommodation to students across the UK and in Dublin, welcoming international students too. From Sydney WorldPride to beaching it up, we've got 6 great ideas on what you can find yourself doing this southern hemisphere summer!