6 Fascinating Places to Visit in Poland for History Majors

Even in a continent brimming with history, Poland is a heavyweight when it comes to fascinating connections with the past.

This is a land packed with fairytale castles, world-class museums, jaw-dropping cathedrals, absurdly beautiful historic city centers and – on the darker end of the spectrum – hauntingly sad remnants from the Nazi occupation in WW2. The list below is just the tip of the iceberg but should get you started with uncovering the past in one of Europe’s most engrossing countries from a historical perspective.

Poland is full of castles – over 500 at last count – and we couldn’t possibly cover them all here, but we can alert you to the biggest and most impressive of the lot: Malbork Castle. This behemoth of a fortress is the largest castle in the WORLD as measured by land area, and it dates back about 800 years. Located close to Gdansk, which is a city served on the domestic routes of the national carrier LOT, the castle is a UNESCO World Heritage Site, as is the Medieval Town of Torun, also in the region and well worth a visit.

Housing some of Poland’s most treasured artifacts, this is the largest museum in the country and contains a whopping 780,000 objects. Although the collections span right up to the modern day, history lovers will want to make a beeline for the Main Building, which among other things boasts a truly incredible display of militaria, some of which dates back to the 1100s. Expect to see ancient suits of armor, sabers, uniforms and more.

Dating back a mind-boggling 1000 years, Wawel Cathedral is older than most of the world’s countries. Part of the larger Wawel Castle Complex, which sprawls over a hill that looms above Krakow, the cathedral is an eye-popping buffet of architectural styles: Romanesque, Gothic, Baroque, Neoclassical and Neo Gothic all compete for attention in what culminates as a dazzlingly impressive display of craftsmanship.

This extraordinary mine has a history going back to the Neolithic period (appx 12,000 years ago), but the mine in its current form was excavated from the 1200s. Amazingly, it was in continuous operation from then right up until 2007. Nowadays it’s one of Poland’s top attractions: the cavernous subterranean halls are genuinely a wonder to behold, as are the gigantic sculptures dotted around the place. There’s even an underground lake. And four chapels. The mine plunges to a depth of over 300 meters (about the height of the Eiffel Tower) and contains a labyrinth of passages that cover almost 200 miles. So stick with the group – you really don’t want to be getting lost down there.

Words can’t do justice to the beauty of Warsaw’s historic center, you just need to see it. When you do, start at the Old Town Market Place – this huge piazza is the beating heart of the area, bustling with cafes, restaurants and shops. From there, a web of cobbled medieval streets twist and turn in all directions. Look out for St John’s Cathedral, the Barbican and the original city walls. But most of all, try to get lost – this is a place where you should ditch the map and just explore, delving down streets and alleyways on a whim.

A short drive from Krakow, Auschwitz-Birkenau was among the most notorious of the Nazi deathcamps of WW2. It makes for a frankly harrowing day out, but is arguably an essential place to visit if you are in the area, if nothing else to pay respects to the 1.1 million Jews and other victims who were murdered there by the Nazis from 1940-45. Admission is free of charge and visitors should dress in a manner befitting for such a place. How to Travel Europe as a College Student

From finding cheap flights to exploring under-the-radar destinations, here's all you need to know to explore Europe on a student budget! Is Spain on your bucket list? We've got everything you need to know to travel to Spain in 2021—find out how to get cheap flights to Spain, where to stay, and more! 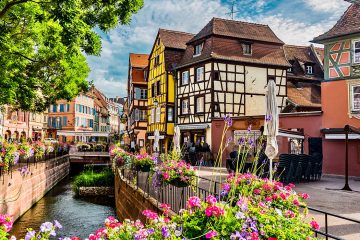 25 Best Places in Europe to Visit this Summer

Summer in Europe? Yes, please. Europe is reopening and here's 25 of the best places you can visit this summer.